Watch: Woman in Chivhu Beheads Her 4 Children and Burns Them 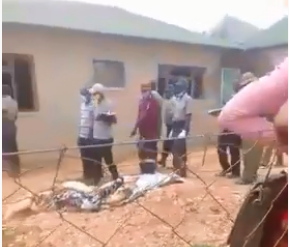 A woman in Chivhu beheaded her four children and then set her home on fire with the children inside on Wednesday. Two of the children could not be retrieved and were burnt to ashes whilst the other two bodies were laid outside. The woman murdered her children after an argument with her husband. A witness who took the video said she was pregnant with another child and had gone to turn herself in to the police.

“Police are currently attending to a report that a woman beheaded her four children and set the house on fire in Highview suburb in Chivhu. The woman then surrendered to the police,.

It is a season to strengthen prayers as 2020 has been a tough year riddled with death, from the moment the corona virus broke out. We need to intensify prayers of protection for our loved ones especially in this end of year season where ritualistic sacrifices are most common. May the souls of these dear children rest in peace.