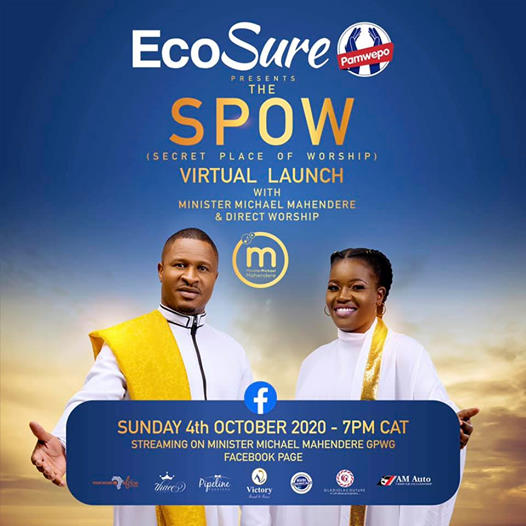 Multi-Award winning Gospel Musician, Minister Michael Mahendere launched his new album last night, through a livestream concert that was powered by Ecosure Pamwepo. The album, titled, The Secret Place of Worship (The SPOW), is true to its name. We were enthralled in worship as he lead us into deep moments of intimacy through both the words and the instruments of the song. It was a time of separation, as the audience momentarily cut themselves off from the outside world and just focused on Jesus. He also performed my personal favorite, Hallelujah We Praise (Halle hallelujah).

He had this to say about his new album,

It’s just a feeling but I think when the Israelites were walking through the Red Sea and away from the Egyptians, this is the kind of Music they had on their Playlist.

I can say with 100% certainty, that I AGREE!!! This is one album that’s going to be on repeat in my home! Congratulations to Minister Mahendere!

Mahendere is a pastor at United Family International Church under Prophet Emmanuel Makandiwa. He often shares how the teachings of Prophet Makandiwa have changed his life.

[1]Minister Michael Mahendere started music at the age of seven in 1990. He began his career being part of the group, Mahendere which consisted of his brothers Akim, Misheck, and Amos. Their first album was Mwari Mukuru in 1994 which topped the charts in Southern Africa. Michael Mahendere was only eleven at this time. He believed there was more he could do to develop himself in terms of music and although he had limited resources, he began to learn how to play instruments. He started learning the acoustic guitar which his father had bought for them. He then learnt to play the keyboard and the drums in 1998. He never had actual drums but he improvised to develop his skill. Some of the projects he did with his brothers include Rumbidzo and Mapisarema 23. In 2009, Michael Mahendere became a Music Director at the University of Zimbabwe and launched a Chinese Choral group which became attached to the Confucius Institute. Michael Mahendere declined a scholarship to study Music in China as he had found a home at the United Family International Church where he served in the choir. In 2011, the church’s choir (UFI Choir) did a musical project in which Michael Mahendere led a song called Makanaka Jesu, which has over 1.8 million YouTube views.

The rest is history….

Most Viewed Song Online – ‘Salt of the Earth’

Best African Gospel Artist Of The Year Award For 2018

Is Zimbabwe Becoming a 1 Party State?